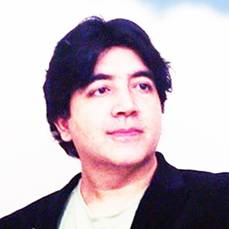 Sandeep Khurana is a Spiritualist, Music Composer and Film Producer.  He has composed and produced more than 100 albums in the genres of New Age Music, World Music, he has produced info videos on on Yoga, & Healing for TV. He is the author of the book "Karma Yoga and Mind"

His New Age Music in the categories of Yoga music, Relaxing music, Sacred Chants, Healing Music and Dance Music, are in iTunes Top 100 New Age Music charts. He has more than a million people in over 50 countries subscribing to his music. He has spent several years in studying various spiritual and healing methods, like Yoga, Reiki, Osho mysticism, Pranayama, Chakra healing and others.

“Inspiring, Entertaining, Fulfilling”, is how one would describe the works of California based Composer and Filmmaker Sandeep Khurana. His accomplishments in the field of music are unparalleled, and his creations continue to influence and benefit the lives of millions around the globe.  A versatile composer with a distinctive style, he has composed for more than 60 albums and countless productions in the genres of Western Classical Symphony Music, Romance, New Age Music, Trance, Indian Classical, World Music and Film Music. His amazing line up of popular new age lifestyle albums on Relaxation through Music, Sound Yoga, Guided Meditations, Chakra Healing, Reiki Music now figures in iTunes Top 100 New Age Music charts and more than quarter million people in more than 50 countries are subscribed to his music, apart from the music he provides to Films, and TV industry. His music has been part of reality shows on STAR TV and Channel V. He has also directed short films, and produced educational videos on Yoga & Alternative Healing that have been aired on TV Channels in California and Florida, as he continues to pursue his dream is to make inspiring music and films for the masses. With a degree in Computer Engineering from the prestigious Delhi College of Engineering, followed by an illustrious career working at prominent positions in top IT companies in India, Singapore and US, Sandeep Khurana decided to give his dream a chance. He then took a break from his IT career, earned a Diploma in Film Direction, Production and TV Journalism from Asian Academy of Films and TV, studied classical music at Ali Akbar Khan College of Music, California.

And in 2004 was launched “SK Infinity”, his dream initiative to produce meaningful music and films for people across the globe.  A span of few years, and he has produced more than 60 albums, provided music for films and TV productions, directed short films and documentaries for TV.  Sandeep’s signature sounds are mystical, with inspiring folk influences, ensemble rhythms, with subtle use of modal harmonies and western symphonies. A lot of his new age compositions blend nature sounds with lilting music captivating the listeners by their melodious richness and simplicity.  Another phenomenal task he has accomplished is that he is carrying forward the rich Indian Heritage of Yoga and Spiritual techniques that originated in India ages ago. Hence his focus is not only to entertain the masses, but also to educate and empower them through his works.  His info-films on Yoga, Reiki, and Pranayama have been aired on TV and screened in festivals. Radio channels worldwide feature music from his popular albums including “The Love Philharmonic” (Rhythm & Blues), “Endless Numinous String Ensemble” (Western Classical), “Moods and Music” (World Music), “Piano Romance Love Instrumentals (R&B)”, “Yoga Philharmonic (New Age)”,” New Age Yoga Music (New Age)”, “Shiva Mantras Sacred Chants (Devotional)”, “Shri Hanuman Chalisa, Symphony of Sacred Chants (Western Harmony)” and several others.  “The journey has kind of begun”, is how Sandeep Khurana describes it!  He gratefully acknowledges the recognition from the newspapers and magazines from around the world that have featured his work and also published articles written by him.